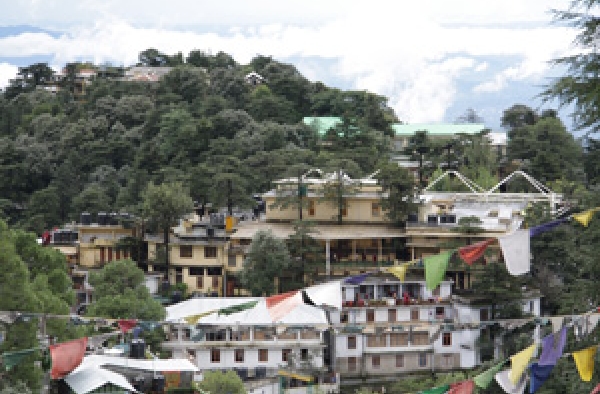 Dinner and overnight at the Hotel

Buffet breakfast at the Hotel, after the breakfast visit golden Temple which the most famous Temple for Sikh religion, lunch in hotwel after the lunch  depart by surface from Amritsar to Dharamsala. (200 Kilometres, 6 hours) Dinner and overnight at your Hotel.

Day 03. In Dharamshala and Sighteeing

Buffet breakfast at the Hotel,Later half day visit to Norbulinka Institute and Namgyal Monastery.

Norbulinka Institute:Just four kms from Dharamsala, Norbulinka was established to preserve and teach the ancient Tibetan arts.The nunnery close to the institute is a place where women are taught the advanced levels of Buddhist philosophy and Namgyal Monastery.  Return to hotel for Lunch. Afternoon walking tour to McLoedGanj including visit to Tibetan Museum.

McLeodganj.McLeodganj is today the residence of His Holiness, the Dalai Lama, the place has developed as headquarters of the exiled Tibetan Government.

Dinner and overnight at Hotel

The temple is situated on the banks of the river Beas at Hat or Hatta. It is one of the ancient in origin  and oldest in the valley.  Its massive pyramidal structure magnificently decorated with images of Durga, Mahishasuramardini, Vishnu and Ganesh in the outer 3-sided shrines.

Lunch, Dinner and Overnight at the Hotel

Day 05. In Manali and Sightseeing

Naggar Valley  Naggar was the former capital of Kullu about 1460 years.  It was founded by Raja Visudhpal and continued as a headquarters of the State until the capital was transferred to Sultanpur (Kullu) by Jagat Singh probably by 1460 A.D. visit Rurek art gellary.

Hadimba Temple or Dhungiri temple in  This four story wooden temple is located in the middle of a forest called the Dhungiri Van Vihar. From the name of the forest parkland this temple derives its name.Lunch at your Hotel, Afternoon at Leisure

Dinner and overnight at your Hotel

Breakfast at the Hotel, depart by surface to Jispa (141 Kilometres, 3-4 Hours drive)  over Ratang la pass and Kelong which is the distric of Lahoul, here we stop for lunch and tea after lunch further drive to Jespa, Dinner and overnight at your Hotel

Breakfast at the Hotel, depart by surface to Sarchu (75 Kilometres, 3-4 Hours) over Baralacha pass ( 4883mt) from the top you can have a view of beautiful peaks of Chandartal lakes and via Darcha village from the village a popular trek leads to Lamayuru ladakh for 22days, lunch, Dinner and overnight at Camp.

Breakfast at the CampPick up from Sarchu and drive to Leh (204 km) 6-7 hrs. over Lachung la pass (5060 mt) and Taglang la pass (5320 mt) which is the second highest motorable road in the world then cross the Indus river near Upshi, upon arrival check in Hotel. Dinner and overnight  at Hotel.

Morning we will be doing short sight seeing around upper Leh. Shanti Stupa, built by Japanese master in 1995, from here we can  have the panaromic views of Leh and surrounding areas of Indus valley. Sankar Gonap is a  small Gelukpa  Buddhist monastery at upper  Leh and it is the monastery of Head lama  of Ladakh. Namgyal Tsemo or the  Victory peaks as it is called is on the top of the Leh and it was a ancient Casstle of Ladakh King dRakpa Bumde and  Lehche Spakar or the Leh Palace is in nine storey  built in 17th century by Ladakhi famous King Senge Namgyal. Now it is taken care by the Archeological Survey of

India, dinner and overnight in Hotel.

After breakfast leave by jeep to visit Stok royal Palace, the present home of royal family of Ladakh and you can visit the most beautiful royal musuen for ancient ornaments, jewelleries, Crown of the King and the queen.SHEY- The ancient capital of Ladakh,17th century copper gold gilted statue of historical Buddha.  THIKSEY, the  most beautiful Gelukpa monastery and huge famous Future Buddha- The Lord Maitreya and HEMIS, The Drukpa monasteries located in the deep gorge, dinner and overnight in hotel..

Morning we drive to Uletikpo camp which is 70km from Leh will take 2 hrs on the way photo stop at Zanskar and Indus river confluence side and visit the Alchi monastery it is famous for the paintings built by the translator Rinchen zangpo, hot Lunch in Alchi after the lunch we drive to Ule camp, dinner and overnight in fixed camp.

We drive to Lamayuru monastery which is the oldest monastery in Ladakh and famous for its landscape, more than 1000 years back the great Tibetan master Naropa had visited this place and meditate at this place  and you can visit the cave also, hot lunch in the monastery hotel and drive back to Leh on the way visit Rizdong monastery which is belong to Geluk pa sect and visit the nunnery, dinner and overnight in hotel in Leh.

Early morning drive to Nubra Valley via World’s highest motorable road 5600mts and take a complete views of Karokuram and Ladakh ranges and drive further and stop at streams side to take a sight of yaks  and marmots. Then drive toward Nubra Valley  through the tiny villages to Deskit village.  Evening walk up to the monastery for the views of Shayok  and Nubra rivers, dinner and overnight in fixed campat Tirit.

Between Deskit and Hunder village, there is a beautiful sand dune and Bactrian camel can be seen. So it is better to take a walk in the sand-dune  and double humb camel riding. Visit  Hunder temple and  Jeep will be waiting and drive to Deskit for hot Lunch. After lunch drive to other side of the shayok river toward Panamik hotspring for medicinal bath.  On the way back there  is a beautiful Chamshan lake, and visit Samstanling Buddhist monastery at Sumur

village, dinner and overnight in Tirit.

Day 15.  Drive back to Leh over Khardong La pass, reach Leh by 4 Pm, dinner and overnight in hotel.

Early morning transfer to the air port, reach Delhi by 10 am, and transfer to the hotel, after lunch half days old and new Delhi  tour visit jamamasjid and Rajghat in old Delhi and India Gate, Rastrapati Bhawan and Parliament house in new Delhi after dinner late night transfer to the international air port.